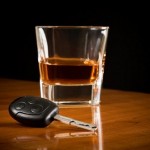 A “deuce” in California may be charged as a misdemeanor or a felony. Felonies are crimes for which the punishment can be a term in prison over a year, however, most DUI cases in our state are misdemeanor matters.

When violations of Vehicle Code 23152(a) and 23152(b) are reported by police as misdemeanors, a person who has been arrested can usually expect to be taken to the police station, tested for controlled substances (blood test, breath test or both) in his system, photographed and fingerprinted, and have his bond set by the watch commander on duty at $2500. A bail bondsman will likely charge that person $250 to post a bond. A supposedly inebriated driver can expect his bond to be set much higher if he has been convicted previously of driving while intoxicated.

Misdemeanor DUI charges commonly result when the arresting officer determines that evidence exists indicating the person driving the vehicle was under the influence, and no accident took place that injured people or property. Physical tests of the driver at the scene of the stop, the odor of alcohol, slurred speech, and watery eyes are just some of the observations officers list when reporting people they believe have been operating a vehicle while under the influence.

Felony DUI’s usually involve an automobile accident and/or people injured either in the driver’s vehicle or in any car with which his vehicle collided. The policeman who arrests the driver does not have to have witnessed the collision. A person written up for a felony deuce can expect his bond to be considerably higher than $2500. If the arrestee does not bail out of jail, he will likely be taken to court for an arraignment (the first court appearance in a criminal case, wherein a defendant pleads guilty or not guilty) within 48 hours.

A Californian facing a felony DUI should be forewarned that prosecutors are now often adding strike special allegations to their criminal complaints. A strike DUI conviction can land a defendant in state prison for up to 3 years, and will considerably increase a person’s time behind bars for any criminal convictions he may have in the future.

Regardless of whether or not you are facing a misdemeanor or felony DUI case, it is absolutely in your best interests to consult with a knowledgeable criminal defense attorney who can properly evaluate the evidence against you. Judges in California take violations of drunken driving laws very seriously and commonly hand out tough sentences to offenders. A private attorney can protect you from much of the cost and harm you might suffer if you choose to represent yourself or utilize the services of a terribly overworked public defender.