An area of the law that deals with the actions and well-being of persons who are not yet adults.

Juvenile courts generally have authority over three categories of children: juveniles accused of criminal conduct; juveniles neglected or abused by their parents or in need of assistance from the state; and juveniles accused of a status offense. This last category refers to conduct that is prohibited only to children, such as absence from school (truancy), flight from home, disobedience of reasonable parental controls, and purchase of alcohol, tobacco, or Pornography.

Originally the term juvenile delinquent referred to any child found to be within the jurisdiction of a juvenile court. It included children accused of status offenses and children in need of state assistance. The term delinquent was not intended to be derogatory: its literal meaning suggested a failure of parents and society to raise the child, not a failure of the child.

The modern trend is to separate and label juveniles based on the reason for their juvenile court appearance and the facts of their case. Many states have created three categories for juveniles: delinquents, abused or neglected children, and children in need of services. Delinquents are juveniles who have committed acts that would result in criminal prosecution if committed by an adult. Abused or neglected children are those who are suffering from physical or emotional abuse or who have committed status offenses or petty criminal offenses. Children in need of services are ones who are not abused or neglected but are needy in some other way. These children are usually from impoverished homes and require improved nutrition and basic health care.

Generally, the procedures for dealing with abused, neglected, and needy children are less formal than the procedures for dealing with alleged delinquents. The subsequent treatment of nondelinquent juveniles by the courts is also markedly different from the treatment of delinquents. Separation of noncriminal cases from criminal cases removes some of the stigma attached to appearance in juvenile court.

Juvenile court proceedings are conducted in private, whereas adult proceedings are public. Also, whereas adult criminal courts focus on the offense committed and appropriate punishment, juvenile courts focus on the child and seek to meet the child’s needs through rehabilitation, supervision, and treatment. Adult courts may deprive adults of their liberty only for the violation of criminal laws. Juvenile courts, by contrast, are empowered to control and confine juveniles based on a broad range of behavior and circumstances. 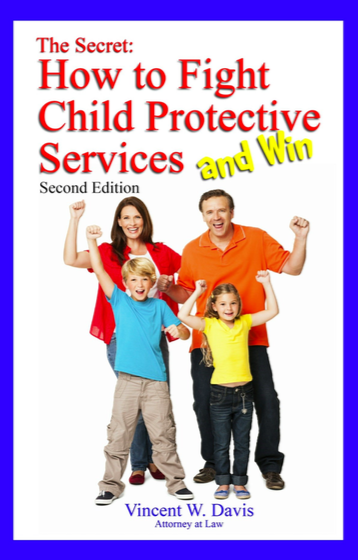 Vincent W. Davis & Associates helps families. If your child has been removed from your home and has been placed in foster care by Child Protective Services (CPS) or Department of Children and Family Services (DCFS), because you have been accused of child abuse, neglect, drug use, etc, we may be able to help your family reunite. If you want to get custody of a grandchild or other family member who is currently placed in foster care we are here for you as well.

The Secret How to Fight CPS and Win eBook